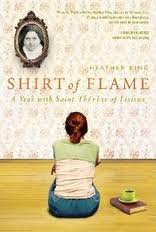 SHIRT OF FLAME:
A YEAR WITH ST. THÉRÈSE OF LISIEUX
by Heather King


Former barfly and cloistered 19th c. French nun join forces
I'm a lawyer turned writer, and a Catholic convert who spent my entire twenties sitting on a barstool. Thérèse of Lisieux (1873-1897) was a bourgeois French girl and lifelong virgin who entered a cloistered convent at the age of fifteen and stayed there, unnoticed, unremarked upon, until her death nine years later.
But before she died, under orders from her , she wrote her spiritual memoirs, now known as The Story of a Soul. In them, she set forth what is now known as the “little way,” a path that has proven so universally appealing that Thérèse has become a bridge between believers and non-believers, laypeople and clergy, East and West, women and men, feminists and right-wing conservatives, the old, the young, and the middle-aged. She was canonized a mere (and to that point, unheard-of) twenty-eight years after her death, and in 1997, was made a Doctor of the Church, an extraordinary honor bestowed, to date, upon only four women.
Around 2008, I was struggling with the aftermath of a divorce, a sense of mortality after a brush with cancer, and the sense that my work was decidedly not bearing fruit I needed a spiritual guide. And thus it came to be that a middle-aged convert/seeker/pilgrim/writer with a checkered past, a shaky present, and an unknown future came to spend the year wandering around the “colorful” neighborhood of Koreatown, Los Angeles, with a Carmelite nun who died of TB, at the age of 24, crying "I love Him!"...


“What St. Thérèse did for Heather King, she can do for each of us.
If you are aching at some very deep places, let this book be your doctor.”
- Ron Rolheiser, author of  The Holy Longing


“What do Heather King and St. Thérèse  of Lisieux have in common? Their lives of faith have been propelled by a revolutionary refusal to reduce their desire for happiness. Read this book and you will want to join them in their defense of the desires that make us human.”


- Lorenzo Albacete, author of God at the Ritz


“A moving book written with so much humility, confidence, and love. The true meaning of the Little Way shines through Heather King’s grace-filled witness. The author’s original prayers are some of the most beautiful I have ever read.”
-  Fr. Peter John Cameron, OP, editor-in-chief, Magnificat
“Heather King’s sojourn with Saint Therese of Lisieux is a magnificent testimony not only to the Catholic conviction that the Saints endure in the life of the Church as real friends and lively companions, but also the uncanny ability of the “Little Flower” to graciously insinuate herself into the lives of the most unexpected people in the most surprising of circumstances.  One of the year’s best reads in Catholic spirituality!”
- Father Robert Barron, Founder and Director of Word on FireCatholic Ministries
“Shirt of Flame is a profound meditation on the spiritual depths that can be ours if we are not afraid to start with ourselves, with our seemingly little lives, little concerns, and limitless longings.”
- James Stephen Behrens, OCSO, Monastery of the Holy Spirit (Georgia)
“Heather King’s incisive honesty draws me in, makes me feel her agonies and joys, and sends me away enriched. St. Thérèse must be very pleased.”
- Robert J. Edmonson, CJ, translator and editor, The Story of a Soul: A New Translation

Thérèse could pour out bucketfuls of reverential tears; she had seen the heavens open and the smile of the Blessed Virgin. But she could not, simply could not, manage what the most average, worldly, and superficial of her fellow pupils managed without any difficulty: to accept a harsh word unperturbed, smile in the face of mockery or reproach, master her feelings at receiving a poor mark.
—Ida Görres, The Hidden Face: A Study of St. Thérèse of Lisieux


Here was one place I was just like Thérèse, or Thérèse as a prepubescent child: her habit of melodramatically over-emoting:

I was really unbearable due to my overly great sensitivity. So if it happened that I involuntarily gave a slight amount of trouble to a person I loved, instead of taking the high road and not crying, I increased my fault, instead of reducing it, by crying like a baby. And when I started to become comforted by the thing itself, I cried because I had cried. . . . All this reasoning was useless, and I couldn’t manage to correct this wicked fault.”

This hypersensitivity—which, if my own experience is any indication, in all fairness springs from an almost unimaginably deep hunger for connection—applied especially extended naturally, to her relationships with people. One of the most revealing incidents of Thérèse’s childhood, in fact, was her feeling for, and rejection by, two of her classmates:

My sensitive and loving heart would have easily given itself away if it had found another heart capable of understanding it. . . . I tried to link up with other little girls my age, especially with two of them. I loved them, and for their part they loved me as much as they were capable of loving. But alas! How narrow and flighty is the heart of created beings!!! . . . Soon I saw that my love wasn’t understood.
One of my girlfriends, who had been obliged to go back home to her family, came back several months later. During her absence I had thought about her, carefully guarding a little ring that she had given me. My joy was great when I saw my friend again, but alas! All I got was an indifferent look.

What today we call “love addiction” was in medieval times referred to as “attachment,” from old European roots meaning nailed to. I’m not suggesting that Thérèse’s attachment to her friend was pathological, but I am suggesting that the mark of the saint is an extreme capacity for love.

I am suggesting that if Thérèse had kept her leanings well in check, it was only because of “God’s great mercy! . . . “I recognize that without Him, I would have fallen as low as Mary Magdalene did.”

I am suggesting that Thérèse herself recognized that only grace kept these and similar fever-pitch feelings from leading her astray. (Years afterward in the convent she would conceive for a time a kind of crush on her superior, Mother Marie de Gonzague, suffering such torments when she passed by Mother’s room that she had to clutch the banister in order to restrain herself from looking in for a kind word or an affectionate glance.)

While today people tend to view similarly intense feelings as a sign of the need for psychotherapy, Thérèse discovered contemplation:

One day one of my teachers at the Abbey school asked me what I did on my days off when I was alone. I replied that I would go behind my bed into an empty space that was there and that was easy for me to shut off with the curtain, and there, I would think.” “But what do you think about?” she said. “I think about God, about life. . . . about ETERNITY, I just think!